Achieving a close-knit team requires team members to be altruistic. That they are willing to sacrifice themselves for the ambition and objectives of the team.

In our current society, which revolves around individual achievements and citizens are increasingly thrown back on themselves, altruism seems an outdated concept. In our current egocentric constellation, a much needed counterweight is needed. Generally speaking, altruism is characterized as selfless action. It is often seen as a form of moral duty, but in my view it does not do justice to the foundation of the concept. By definition, any form of ‘duty’ is not selfless.

The pitfall is that these POPs are viewed from the individual and not from the team. As is known in logistics, it is possible that a link can be deployed sub-optimally to ultimately improve the performance of the entire chain. The individual’s performance should be a direct derivative of the team’s ambition and its derived objectives.

Deploying a link in a chain sub-optimally is one thing. Asking a team member to use their core qualities in moderation is a completely different question. It is asking a top scorer to play the ball more often instead of scoring yourself. That requires the individual to be sacrificial. In an environment where individual performance is so central, it is asking for difficulties within a team.

One of the reasons organizations focus so strongly on individual performance is the almost obsessive urge to perform as best as possible. Short-term profit thinking prevails over the more long-term ambitions, if they have already been formulated. The same pattern is also reflected in politics, for example. The budget must be in order, the rest will come later. Unfortunately, this is a reversal of the process.

This is a special form of collaboration that is actually the ultimate way of teamwork. Eusociality has evolved in evolution as an effective way to ensure the survival of the species. Insect colonies are the perfect example. The workers in a bee colony who sacrifice everything to enable the Queen to lay eggs. The same behavior can also be observed in ant colonies. The different groups have their own specific role. Everything is aimed at making the colony function optimally. The individual performance is coordinated accordingly.

In a looser context, man has a similar way of acting. As an individual man had no excellent qualities, as a group all the more. Shielding the whereabouts, looking for food together and jointly looking after offspring.

Organizations are in fact the same as living organisms. Same as the insect colony. In order for the team to function optimally, it must therefore be central. The team’s ambition and objectives must be clear. The individual contribution can then be determined.

When determining the individual roles and responsibilities, it is important to carefully consider which are needed and which persons are present. A good mix, diversity of the team is a precondition. The problem of labor immobility quickly arises within organizations. Where a coach of a sports team can simply switch, such mobility within an organization is much more difficult to achieve.

Managers will therefore have to steer more and more proactively on the core qualities of the employees [the strengths and weaknesses]. improve team ambitions. This creates transparency and mutual appreciation within the team for each other’s willingness to sacrifice and contribute to the team. For example, the spotlight is not only on the top scorer, but also the midfielder who closes every hole and the keeper who is always ready, but actually does ‘little’. This increases mutual trust within the team and ultimately the total team performance. 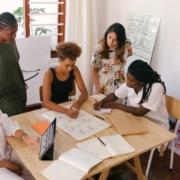 How do you reward teamwork?

How do you regulate the immense flow of information?

From mistrust to trust.
Scroll to top