In the trade war with China, Donald Trump can’t hide tough twitters that the US economy is becoming increasingly isolated over time. Other countries, including Europe, ultimately benefit.

Time and time again, Donald Trump threatens to raise import tariffs in the ongoing trade war. Not only for China, but also other countries are confronted with Trump’s muscle strategy. For US companies and especially importers, this is only half of the bad news. China answers moderately and thoughtfully. It does not block all imports from the United States. Strategic goods remain relatively unaffected, but it is even more important that China further opens up its market to other countries, which suddenly have easier access to 1.4 billion consumers. American companies are missing the boat here.

While import tariffs for most US products were increased by China by 20.7%, China lowered import tariffs for other countries by 6.7%. Strikingly enough, China’s interim tariff adjustments fall within the WTO agreements. Which shows that Beijing operates conservatively but above all strategically.

China has not yet retaliated against those US products that had not yet been hit by increased import tariffs. It is possible, but China is not doing it. It avoids further escalation of the trade war. It turns out that $ 67.7 billion in U.S. exports – a total of $ 154.8 billion in U.S. exports to China in 2017 – have no retaliation whatsoever.

China mainly looks at which products or sectors are of strategic importance to it and the agricultural sector of the United States is hit the hardest. Full US agricultural exports of nearly 22 billion have had to handle a full increase. This also applies to wood, paper and metal products.

However, machines, chemicals, optical and medical instruments are only partially subject to increased import tariffs. And goods such as those from aviation, pharmaceuticals and car parts hardly ever come to anything. Petroleum is also only affected to a limited extent.

China’s policy is clear. Goods on which it is highly dependent, which it cannot directly replace or which are necessary for domestic economic rest, are left alone.

The second part of China’s strategy is that it gives other countries more room. Where American soybeans are hit with an increase of 28%, exporters from other countries pay only 3% import tariff. Other agricultural products are 42.5% against 8.9%. In the latter, China has lowered the rate for non-US products by just over 2%. A clear signal to other countries.

America is losing its position.

This more spur policy of China means that American companies and exporters not only see their sales lose in the short term. They are also losing their strategic position in the market of China. By favoring other countries with lower import tariffs, it will not only become cheaper for those countries to sell their product in China, but the Chinese consumer will switch as a result. Away from American products to Japanese, European, Australia, etc. Once American has lost that position and influence with Chinese consumers, it will be very difficult to ever regain it.

Not only because America then becomes dependent on China’s preferences, but also because the Chinese consumer has switched, and especially because that consumer knows the reasons behind this. Anyone who knows Chinese culture somewhat understands that Donald Trump is putting the United States at a great distance with his trade war.

Fishery products are an example of this. The U.S. lobster industry saw its exports drop 70 percent after China imposed its 25 percent reed fee on July 6, 2018. Business is so bad that the sector sought federal aid, although it was not eligible for Trump’s grant programs. On the other hand, Canadian lobster exports to China nearly doubled as it benefited from a 3 percentage point rate cut in 2018.

Trump has also seriously damaged South American trade interests by not participating in the CPTPP in 2017. This Asian trade deal between Australia, Brunei, Canada, Chile, Japan, Malaysia, Mexico, New Zealand, Peru, Singapore, and Vietnam , gives companies within these countries, both importers and exporters and manufacturers, a clear advantage over their US counterparts, who are frustrated on the sidelines to watch their market share evaporate rapidly.
Europe.

But not only the countries of the Asian region are benefiting from the reorientation of China’s trade policy. European companies are also benefiting from lower import tariffs and China’s urge to expand to the ‘West’. Not only through the development of the Silk Road, but also through increased investment in Europe and the strengthening of ties between Europe and China. In a number of areas, China has already addressed existing grievances from Europe when it comes to protecting information technology by ratifying ITA. China has also lowered tariffs on multiple consumer goods. Where at first only an average of 14% products fell under a lower rate, this was expanded in 2018 to more than 1449 products

There is no doubt that China also suffers from the trade war with America. However, China is wary of harming itself, unlike Trump, who sparingly transfers one charge to another, without gaining a direct strategic advantage, other than trying to ‘beat’ the opponent. As previous trade disputes have shown, there is never a winner. Only losers. Big and small.

Since Trump charges are not hindered by any thoughtful strategic policy. Trump also confronts other countries, even loyal partners, with taxes, and while China, on the other hand, gives other countries the space to take over the American position on the Chinese market in this conflict, America is falling further behind. The domestic market of America, especially agriculture, is severely affected by the trade conflict.

China knows how to limit the damage and has substitutions available. That makes America the big loser in this trade war and China and the rest of the world the small loser. This means that America will definitely lose its dominant role in the world economy. Because putting 1.4 billion consumers on the block is never a good plan. 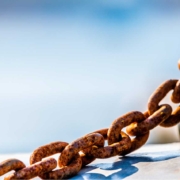 Effects of Brexit on your supply chain.

This gives you insight into your e-chain

The 6 most important warehouse developments.
Scroll to top